On Board Induction Programme for Management Trainees 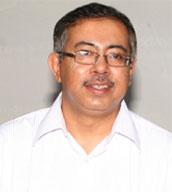 Mr. Indranil Samadar is a graduate in Electronics and Telecommunications Engineering from Jadavpur University and holds a PGDBM from IIM Kolkata. He has 18 years of rich industry experience in the IT and Telecom industry. He has worked with Pertech Computers, Hughes Network Systems, TATA Consultancy Services and Intel. Currently he is working as the Business Development Manager for Intel in East, North East and Bangladesh.

Mr. Samadar in his interaction with IT Management students of KSOM, spoke about the concept of ‘Cloud Computing’, its uses and implementation. Explaining this concept he said that when computing tasks are assigned to a combination of connections, software and services accessed over the Internet; it is referred to as Cloud Computing. These advances in client-server technology have occurred in the last decade. The 1970’s concept of a hard-wired server connected to a client by network cable is seldom seen in today’s world. Many computers are no longer clearly distinguishable as clients or servers. Cloud Computing is the IT infrastructure of next decade. Cloud architecture is fundamentally changing IT by:

It restructures an IT infrastructure and resources on a utility model, similar to the other utilities such as electricity. Service providers share their perishable and intangible computing power with many subscribers, improving utilization rates and reducing costs. A traditional stand-alone system rarely uses more than 20 percent of the available capacity.

Some of the industry concerns regarding cloud computing are:

Security: 70% say that one important issue that prevents the spread of cloud computing is security and privacy related issues.

Efficiency: In addition to concerns about security, businesses are also worried about acceptable levels of availability and performance of applications hosted in the cloud. Today’s Technology would require building up 45 new Coal power plants to support 2015 IT.

Manageability: IT will spend $2 T on deployment & operations through 2015 unless smarter infrastructure radically simplifies management of virtualized.

Mr. Samadar summed up by listing some of the major IT challenges of the future: