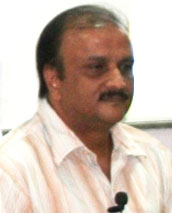 Mr. Das is a 1982 cadre Indian Forest Service officer. He has served in many responsible capacities in his career span of over 29 years. He was the Managing Director of Orissa State Disaster Management Authority. Prior to his current assignment, he was Chief Conservator of Forest, Bhubaneswar Division, Orissa.

The Volunteers of NSS Wing of School of Management, KIIT University (KSOM) had organised a Knowledge Seminar on Disaster Management on 17 September, 2011. Sri Sidhanta Das, IFS, Member Secretary, Orissa State Pollution Control Board had delivered a talk on “Disaster Management”.

Mr. Das began by defining a disaster. Dictionary meaning of “disaster” may be taken as: “a sudden accident or natural event that causes great damage or loss of life and property”.

Disaster is a simple equation of hazard plus vulnerability. When people become vulnerable to hazards disaster takes place. Disaster management is to empower the mankind to bravely combat the threat of hazards. Hazards are inherent in life. They will continue to exist. No one can be free from hazards. But vulnerability to hazards is owing to causes made by mankind itself. In disaster management, the stakeholders involved are generally, the Community, Civil Society, External Agencies and the Government.

The role of stakeholders at different stages of disaster is as follows: