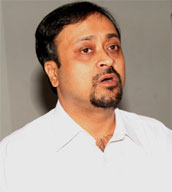 Topic: Is Satyam an aberration ?

Prof. Kaushik Mukherjee is currently working as Company Secretary, Compliance Officer and Chief of Legal Affairs of Phillips Carbon Black Limited, a RPG Company with a Rs. 1400 crore annual turnover. Mr. Mukherjee has teaching experience of almost 10 years and is a regular faculty in the training orientation programs conducted by the Institute of Company Secretaries of India, EIRC. His area of specialization includes Business Law with emphasis on Company Law; SEBI Compliance; Corporate Governance; and CSR with emphasis on strategic CSR practices. He is a winner of RPG TOP GEAR AWARD in 2006-2007, the most coveted award in RPG group. He has been winner of Employee of the month award in 2008 and 2009. Branded as “High Flier” in the RPG Group, he is known for converting almost impossible approvals to success stories.

“Satyam scam is an aberration and the events are specific to the company in question” said Prof. Kaushik Mukherjee in his discussion with the students of KSOM. Pondering on the issue Prof. Mukherjee discussed about what happened to Satyam, the fourth largest IT industry of India and what are the forces which would decide whether it is an aberration or not.

A company is listed in BSE or NSE only when it has good governance, but Satyam fraud reflects an example of human greed. This is a one-off thing which shows failure at all levels. Be it among the lower level accounting staff of the company, bankers, auditors, or independent directors. It’s not just about having good corporate governance what matters is the sincerity with which a company follows the laws and principles of good governance.

Talking about the new Companies Bill and measures which provides more stringent provisions to avoid such frauds in the future, he said that it introduces the concept of responsible self-regulation of companies. Such self-regulation has to be balanced with greater disclosure and transparency. He explained how the proposed new law will probe the role of key functionaries such as company secretaries, auditors and the chief financial officers.

From a larger perspective, the Satyam incident highlights the need to make these key functionaries more accountable and the statutory bodies to be more vigilant. They have to ensure that auditing standards are followed strictly and that companies comply with statutory provisions.