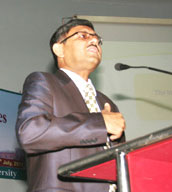 Mr. Sudip Bandyopadhyay is currently the Managing Director and CEO of Destimoney Securities, a full service financial organization, promoted by New Silk Route- an Asia focused growth capital private equity firm with over 1.5 billion under management. Mr. Bandyopadhyay is also an independent non-executive director of Hong Kong Mercantile Exchange. A Chartered Accountant by profession, he has over 23 years of experience in the financial sector in the areas of capital market, money market and currency market operations. He has worked with reputed organizations like HLL, ITC & Reliance Money. He created & led Reliance Money, the largest retail broking and distribution company during his stint in Reliance as MD & CEO. Mr. Bandyopadhyay was also responsible for the acquisition of AMP Sanmar that launched Reliance’s foray in the Life Insurance segment.

Mr. Sudip Bandyopadhyay, CEO and MD of Destimoney in his interaction with students of KIIT School of Management spoke about India’s growth story, mainly in comparison to China. The objective of growth for India, according to Mr. Bandhopadhyay, is to empower the masses by making smarter decisions in investment.
Currently other developing countries, like China and countries in Africa, are doing better in terms of development unlike India. Definitely, we have our shortcomings but we also have some strength. The need of the hour is to focus on the positives, which are primarily:

In terms of GDP growth rate India has witnessed a rise from 3.5% to 8.9% since independence. The Indian economic model is unique as compared to other developed nations’ model. The entrepreneur is at the centre of the Indian model and India has a vibrant private sector. A hundred Indian companies have market capital of US $1 billion or more. A thousand Indian companies have received foreign institutional investment. The bad loans in Indian banks stand at 2% as compared to 20% in China. 80% of credit in India goes to the private sector as compared to 10% in China. 125 Fortune 500 companies have their bases in India. Our country has been growing slowly but steadily.

Mr. Bandhopadhyay stated that in India, an individual grows more on his own instead of depending on the government whereas in China, growth is still State induced. India’s demographic dividend will continue beyond China’s but most importantly, we are in a much better position in comparison to China when it comes to purchasing power parity. On the other hand, population growth is slowing. The average percentage growth in 1981-1990 was 2.1%, which decreased to 1.5% by 2000-2010. Literacy rate in India started at 17% in 1950 and rose to 52% in 1990 and as of 2010, the literacy rate stands at 80% a very impressive figure for a developing nation. The middle class in India is exploding and poverty is declining. The population of the middle class has shot up from 65 million in 1980 to 368 million in 2010. Poverty has declined from 46% in 1980 to 16% in 2010.

Productivity has been on the rise and is contributing to our GDP growth.  India is now the fourth largest economy and it will cross Japan in the next three years to become the third largest. There is a stark difference between the growth drivers of India and that of the east and south-east Asia. Our growth has been driven by domestic production, boom in the service sector, increased consumption and use of high technology in a capital intensive industry. In east and south-east Asia, growth has been driven primarily by exports, the manufacturing sector, and investment as compared to consumption. The technology used in these nations is not as sophisticated as ours and the industry is mainly labor-intensive.

Mr. Bandhopadhyay comparing India to an elephant and China to a tiger said that an elephant, which is much slower than a tiger, has a much surer path ahead of it. Furthermore an elephant with a growth rate of 8% is formidable. India got democracy before capitalism and this has made all the difference. And we have waited 3000 years for this moment to arrive. India is more likely than China to preserve her way of life.