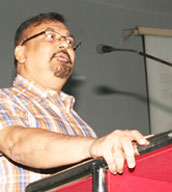 Topic: The Building Blocks of Success

Commodore Dilip Mohapatra is Vice President, Global Learning & Development at Suzlon Energy Ltd. He is responsible for technical, functional and behavioral training at Suzlon, globally, with special focus on Leadership Development.
Under his leadership, Suzlon has been awarded the Golden Peacock National Training Award for 2008, ASTD BEST Awards for 2009, 2010 and 2011 in a row.
Prior to this assignment, he had worked with the Tata Group as, Group Vice President and Director, Tata Management Training Centre as well as VP, L&D & HR sourcing at TCS.
Earlier he had worked as a commissioned officer in the Indian Navy for 28 years and rose to the rank of Commodore. He has been awarded a “Vishist Seva Medal” by the President of India for distinguished services rendered to the Navy. He has also been awarded the National L&D Leadership Award in 2009 for leadership excellence.He holds two masters degrees, an M Sc. in Physics from Utkal University and a Master of Management Studies from Osmania University.

The Building Blocks of Success

Commodore Dilip Mohapatra gave an inspiring talk on “The Building Blocks of Success” to the students of KSOM.
He shared some real life stories and then interacted with the students on definitions of success and gave his own model of success.
He defined success as “Living a life out of vitality, love and joy, while delivering your unique value to the world”.
He spoke about the stairs of success from survival to arrival and gave fascinating tips of surviving in the corporate world and the world at large. He spoke about the need to continuously adapt ourselves to the changing environments; have the right vision; be on the right track and keep moving on it, to add momentum to take us towards our objectives.

He emphasized the importance of building a strong desire; convert it to a will to eventually create our own destiny.
Talking about the ways to become successful, he discussed about the X factors:

that will help us to excel in every field. He also stressed on the 5Fs that we need to take care of in our life:

The central idea that Commodore Mohapatra conveyed was that we must always make a conscious effort to evolve into a better human being and never forget to deliver; success automatically follows.

Commodore Mohapatra summed up “The Building Blocks of Success” as:

Establish your baseline with self appreciation and the balance amongst faith, family, friends, fitness & finances.