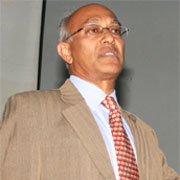 Topic: Business Executives and their competence

Professor Prabhu Guptara is Executive Director, Organisational Development, Wolfsberg (a subsidiary of UBS – one of the largest banks in the world). He is also Freeman of the City of London and of the Worshipful Company of Information Technologists, Chartered Fellow of the of the Chartered Institute of Personnel and Development, Fellow of the Institute of Directors, of the Royal Commonwealth Society, and of the Royal Society for the Encouragement of the Arts Commerce and Manufactures.

He has experience with several organizations including Barclays, British Petroleum, Nokia among several others. He is also an organizer, chair and lecturer by invitation for numerous international conferences. He has contributed widely to radio and television in the UK and other countries (The Money Program, Any Questions) and has written for Financial Times (London, UK), The Guardian, The Times and other publications; articles, for example, in The Gower Handbook of Management, The Gower Handbook of Quality, and the International Encyclopedia of Business & Management (Routledge).

His best-known research publication is “Top Executives in the Global 100 Companies and their IT-Competence” (ADVANCE: Management Training Ltd., UK, and Wolfsberg Executive Development Centre, Switzerland, 1998); and he is included in Debrett’s People of Today and in Who’s Who in the World.

Prof. Guptara in his highly enlightening talk about the current skills expected of a Business Executive, said that in order to understand the Human resource requirement of now, we have to first look back and understand the history of HRM, the difference between ancient man and modern man, the rise of science and technology on society during ancient times and how it has begun to affect our lives in modern times.

As per a recent study, only 10% of the graduates India produces are actually employable. The rest of the lot is not getting employed because 1) they don’t think creatively 2) they are not able to tackle problems effectively. The problem of matching the right people to the right job gets more complicated because things are changing very quickly in the world.

Human resource management basically means matching talents or core competencies of the people and the job requirements. There are various psychological tests to ascertain the competence and the efficiency of the employee. There is a debate on whether these tests are valid across a culturally varied work force. As per the Moore’s law, in every 18 months the processing speed of a processor doubles. Similarly the way we perceive the requirements of the human resource has to change rapidly.

Technology has also defined and would continue to define human resource management. It would:

The new way ahead for an employee to survive and grow in this ever evolving world is to acquire new competencies in shorter time and to keep looking forward to continuous learning and improvements. The future managers of KIIT School of Management also need to take note of this and strive relentlessly for excellence in their chosen field.