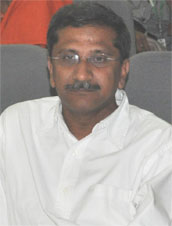 Prof. Pankaj Chandra is currently the Director of IIM, Bangalore. He holds a B. Tech from Banaras Hindu University and a Ph.D. from The Wharton School, University of Pennsylvania. Previously, he has taught at IIM Ahmedabad, McGill University, Montreal, and has been a Visiting Faculty at University of Geneva, The Wharton School, University of Pennsylvania, International University of Japan, Cornell University and Renmin University, Beijing. He has also worked briefly with the World Bank in Washington DC, was the Chairperson of the Doctoral Programme at IIMA and the first Associate Dean (Academic) at ISB. He helped found the Centre for Innovation, Incubation and Entrepreneurship (CIIE) at IIMA and was the Chairperson of the Centre. He has served as a member of the GOI Committee on Clusters for development of the Informal Sector and Committee for Rejuvenation of Higher Education. Professor Chandra’s research and teaching interests include Supply Chain Coordination, Manufacturing Management, Building Technological Capabilities in Indian Manufacturing Firms and Hi-tech Entrepreneurship. He has been published extensively in international referred journals and serves on the editorial board of several international journals. He has also been a consultant to large Indian and multinational firms and is on the boards of several firms and institutions.

Speaking to the students of KSOM on the evolution of management education, Prof. Chandra said that given the pace of growth of Indian economy, several jobs are being added and many graduates are willing to join these jobs first instead of going in for higher education. Fallout of this has been that much of this new workforce is not adequately trained.

Unlike some of the other professional courses, say Engineering, Management Education requires relatively less investments. All one requires is a couple of buildings, an approval and some faculty. This relative ease of setting up Management Schools has caused several thousands of Management institutions to spring up all over the country, with many falling way below the expected standards. This, naturally, raises several questions:

He spoke about the changing management education and emphasized the benefits of Case Study based teaching. He said such teaching helps students create a frame to put real world problems in, and then apply the theoretical learning.

Another important point discussed was about “Sustainability” and “Employability” of Management graduates. Because of efficiency improvements and advancements in Technology, many jobs are shrinking faster rate than they are growing. People today generally are performing greater number of tasks than their counterparts did 20 years ago. Hence, one has to learn to do multitasking and become more adapted to a greater number of tasks.

Prof. Chandra also talked about Entrepreneurship that is slowly making its presence felt in Indian Campuses. Earlier, several B-school graduates used to drop out of their jobs to start something of their own. However, in a marked departure, these days, even fresh graduates are shunning campus placements and going in for their own ventures. Also unlike earlier times, today several graduates are opting for India-based jobs rather than International ones. He said that the number of such people will certainly grow in coming years across all institutions.

When asked about how a Management Graduate should go about starting his/her own venture, Prof. Chandra said that if one really wants to start something, he/she would come to know when is the right time. It could be immediately after graduating, after 5 years, or even 10 years of job. However, he said, prior work experience always comes handy. He further stated that it’s difficult for a single person to have adequate expertise in all areas of an entrepreneurial venture. Therefore one can do better engaging more brains while going into entrepreneurship. Pooling resources decreases risks on each individual and also brings in greater expertise and skill into the venture.

To a question on whether rising prices globally or the recent recession is management education failure, Prof Chandra said that the larger community should not be blamed for mistakes committed by a few. People wanted to consume more than they should. Poor ethics was one of the main reasons for the subprime crisis.

On Ethics Prof. Chandra said that one should learn how to resist. He said “Others will want you to do things they themselves do not want to do”. Saying No to such attempts may come at a cost in the short run, but in the long run it’s always peaceful.

He concluded by saying that in the end it’s all about choices one makes and young professionals should develop that kind of a personality to politely say ‘Sorry, I can’t do it.’

KSOM organizes its 13th National HR Konclave on the theme: “The Re-skilling Revolution: The Vector of Transformation”