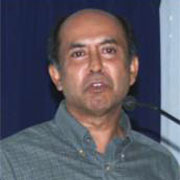 The major highlights of this seminar were:

Prof. Banerjee commenced his talk by emphasizing on understanding transition, a complete change in ideological, political, economic and social system that has passed away. He basically gave a framework for analyzing the respective transition and pointed towards the challenges in it: mainly the common elements that needed to be addressed in all transition countries. He then explained about Reform and Policy Strategies and the components of policy agenda in order to tackle macroeconomic imbalances. He further analyzed the outcomes during this transition, the reason of fall in outputs, the pattern of disinflation and lastly about the Geopolitical factor that played an important role from transition to integration.

Fundamentally Prof. Banerjee dealt with change. This change had economic, political and social influences and is of great curiosity to any manager who has to deal with so many dynamics of change and resistances in the process of creating outputs and not merely outlays.

KSOM organizes its 13th National HR Konclave on the theme: “The Re-skilling Revolution: The Vector of Transformation”