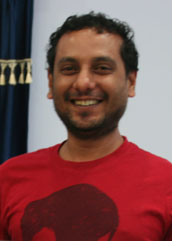 Mr. Gurudatt Khuntia is a postgraduate in Mass Communication and has over sixteen years of experience in print and electronic journalism, advertising, public relations, audio-visual production, publishing and event management. His interests include world cinema and cooking.

Mr. Khuntia delivered a speech on the role of Integrated Marketing Communications in driving sales of products and services. He threw light on how the IMC strategies have evolved post 2000, shifting from practices like advertisements over radio, television, newspapers, print ads, brochures and events to the advertisements over the internet and aggressive public relations practices.

He cited the example of BMW’s The Hire advertisement series, which has been singled out as the first high-profile, big-budget, celebrity-laden Internet marriage of advertising and entertainment. After The Hire was posted on the company’s website, the site traffic increased by 55%, while the guerilla public relations campaign utilized several diverse promotion tactics including seeding news of the BMW Films at key Internet entertainment rumor sites and a radio DJ program in 20 key metro markets. BMW sales increased by 12.5% in the year 2001 as a result of such unconventional yet highly effective strategies.

Mr. Khuntia further spoke about how the Internet is the place to implement IMC strategies and how the use of superstitials, e-commerce, CRM software, and e-mail marketing has revolutionized the promotional practices of companies. The Internet has indeed opened up a world of new possibilities for advertising.