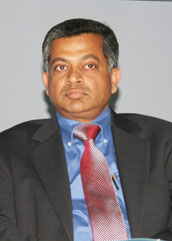 School of Management, KIIT University hosted a talk by Mr. Deepak Mohanty, Executive Director, Reserve Bank of India on “Perspective on India’s Balance of Payment” on 7th December 2012. The focus areas of the talk were Balance of Payment and the growth prospects it has for our country, evolution of Balance of Payment, India’s capital account with respect to the rest of the world and how Balance of Payment can change scenarios and bring in competitive advantage for countries.

Mr. Deepak Mohanty initially spoke about the evolution of Indian Balance of Payment which majorly included six key events comprising of Devaluation in 1966 , the oil shocks in 1979 and 1997, crisis in 1991 , east Asian crisis, Y2K developments and also emphasized on the current global financial crisis.

He emphasized on the inequality of income in India which has increased due to the expansion of the global market. He expressed his concerns about the fact that the economy is absorbing more than it can produce and thereby imports were increasing when compared to exports. This in turn resulted in deficit in the current account of Balance of payment.

Mr. Mohanty, also spoke about the unique features of Indian Balance of payment which has been influenced by the trend in external openness and making India a highly globalized economy. That included generation of employment for the unskilled workforce, use of local resources and innovative means for reducing costs. He outlined the key issues facing the sector, which includes widening of current account balance because of increase in import. He also provided the example of oil and gold which certainly increased imports at a faster rate, border conflicts, lack of capital, culmination in Balance of Payment crises in 1991 and also issues related to Capital account deficit (CAD) and Gross domestic product (GDP) ratio.

According to him, even though financial institutions are willing to help the sector; Balance of payment adjustment is still a major issue. He also pointed out the fact that many people are importing gold in order to create a hedge against inflation. Although the common threat is still oil and issues related to it in the global market.

Mr. Mohanty then provided the grounds for understanding the Global Financial crisis and India’s role in it. He explained about the increased external openness, increase in the foreign direct investment (FDI) and foreign institutional investment (FII), the paradigm shift in the application of equity to debt in the market.

He concluded by saying that we have to increase Indian balance of payments, provide greater exposure and assess external shocks, psychological drivers, resilience imparted by invisibles in the account, vulnerability to trade accounts and the CAD- GDP ratio being above the sustainable level.

Finally, Mr. Deepak Mohanty suggested solutions for the issues discussed. He emphasized on achieving energy efficiency by sustainable utilization of resources, full pass through of international oil prices, to keep a check on import of gold and substantially reduce the same, review of extent of import and productivity based competition of exports. Lastly he expressed that today the economy is still better placed in comparison with 1991 to absorb external shocks.